CRUK RadNet City of London is an organisation of institutes across London coming together with Cancer Research UK to form a major centre for radiation research. This ground-breaking collaboration brings together some of the best resources and academics in London, in order to enhance the pace of radiation research.

Explore the map below to learn about some of the organisations involved and the parts of their research relating to RadNet. You can also find other interesting sites in London, marked below in red. These are public sites that you can visit to learn more about radiation.

At the Francis Crick Institute, RadNet is working with researchers to investigate how DNA repair systems influence how effective radiotherapy is at eliminating cancer cells. In addition, we are investigating how other features of tumours influence radiotherapy including the oxygen level within tumours and the presence of other non-cancerous cells.

Combination therapies aim to minimise tumour cell resistance to radiotherapy and plan treatment so one type of therapy increases the body’s response to the other.

Furthermore, the development of personalised treatment plans and predictive models that account for changes of the shape of tumour and surrounding anatomy during radiotherapy aim to improve the targeting ability and hence reduce damage to nearby healthy cells.
This is a promising look into the future for inoperable non-small cell lung cancer treatment, which has many individual differences, and highly accurate radiotherapies such as proton therapy are making exciting advances.

Groups at Queen Mary University of London are experimenting with manipulating the environment around a tumour in order to increase the effectiveness of radiotherapy treatments. Modifying the blood supply to a tumour to allow more oxygen can reach it has been shown to not only increase the effect of chemotherapy but also radiotherapy. Combining this with imaging of tumours will help understand the biological mechanism of this effect and exploit this property in future treatments.

More recently, we are investigating how exploiting radiation may improve the outcome for use with treatments that target centrosomes, the cell organisers which arrange microtubules to transport things around the cell, and how microtubule-associated proteins may influence the response to radiotherapy.

At King’s College London, radiobiology research is being carried out to better understand what radioactivity does to our cells and body and how it can be used with a biggest positive effect for a patient with cancer. This knowledge will help create highly specific, injectable radiotherapies that target cancer cells spread throughout the body. Also, the type of radioactivity can be interchanged to provide precision and personalised molecular radionuclide therapy with minimal unwanted side effects to cancer patients, by taking into account the location of cancer cells, the size of a tumour as well as the sensitivity of a patient to radiation.
Radioactivity is being used for non-invasive, whole body imaging of cancer to not only predict the efficacy of radiotherapy, but also to determine early-on whether the therapy is working. Radionuclide imaging may also enable us to define parts of a tumour to irradiate at higher doses to ensure more effective therapeutic outcomes. Work is also being carried out to determine the optimal combination of radiotherapy and immunotherapies.

Great Ormond Street Hospital
Great Ormond Street Hospital for Children and University College London Hospitals together form the largest treatment centre for children with cancer in the UK. Radiotherapy is delivered at the UCLH site.
As well as local children, they treat referrals from across the whole of the UK with specialist techniques such as molecular radiotherapy, brachytherapy, stereotactic treatment and – as of Summer 2020 – proton beam radiotherapy as well.
The RadNet work links innovative clinical trials with basic science research, aiming to improve the chance of cure, and reduce the long-term side effects of treatment.

Guy’s Hospital
Guys and St. Thomas’ hospital will work with RadNet in clinical trials in future, utilising their 5 linear accelerators, which are used to produce radiation – these weigh more than The Shard next door! Treatment at Guys and St. Thomas’ hospital is focused on molecular radiotherapy for adults, unlike University College Hospital, for example, which specialises in paediatric cancers. The hospital trust treats up to 80,000 patients a year.

St Thomas’ Hospital
St Thomas’ Hospital is part of the Guys’ and St Thomas’ NHS Foundation Trust. Among other things, the hospital provides radionuclide imaging services where a radioactive chemical travels through the bloodstream. Detected radiation gives important information about the tumour, such as location and stage.

Other sites of interest

Gordon museum of pathology has a diverse collection of examples of disease. It is currently open to medical professionals and students only – in accordance with the Human Tissue Act, but you see at a number of artefacts online.

The Science Museum has many fascinating collections, including a permanent medicine gallery which features some amazing examples objects used in radiotherapy and even some early examples of other uses of radiation, such as the diagnostic X-ray set shown above, from the 1920s.
There is also an onsite clockmakers museum — in the 1920s clocks were made to glow in the dark with radium! Now, radium is used to treat bone metastasis in prostate cancer.

The Wellcome Collection is a free museum and library that houses lots of exciting objects and information about radiation. When X-rays were discovered, the first known use to observe the inside of a human body was Wilhelm Rontgen’s wife’s hand in 1895, which you can see in the description on the map above.

The Faraday Museum houses exhibitions on a wide variety of topics and characters in science. Including William Bragg’s spectrometer, shown above. This instrument demonstrates another interesting use of X-rays; it was used to look at the structure of different materials by looking at the diffraction pattern of X-rays.
This is the basis of all modern X-ray diffractometers. Explore the rest of the museum with the interactive tour linked in the title of the map description above.

RadNet City of London has five main themes that all our research works towards. Below is a brief summary and some more examples of links to radiation in everyday life and history.

Radiation resistance occurs when the tumour cells have the ability to continue growing after being treated with radiation. Across University College London, UCLH and the Crick we are working on this theme from a variety of angles:

• Radiation resistance in brain cancer: Glioblastoma Multiforme (GBM) is an aggressive brain cancer that is very difficult to treat, with an average survival of 15 months. Increasing evidence suggests that this disease relies on a subset of cancer cells with distinct proliferative properties, called cancer stem cells or tumour-initiating cells. We are investigating if these cells repair their DNA in a different way from other cells and are therefore resistant to radiotherapy. We aim to use this information to develop new targeted agents and increase the sensitivity of the cells to radiation in future. 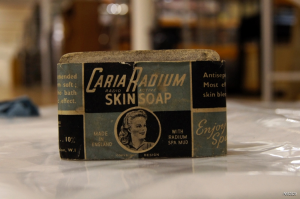 The scientific community’s knowledge of radiation has come a long way since the discovery of radioactive materials such as radium and polonium by Marie Curie. Before the dangers of radiation were understood, it was used in a wide variety of products such as toothpaste and water. Unfortunately, this misuse caused many cases of radium poisoning. 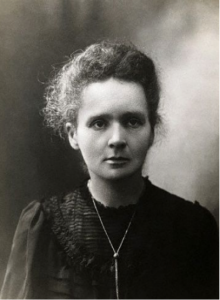 Groups across RadNet City of London are studying the effect of radiotherapy on the immune response in the cells around the tumour with the aim of attaining a combination of therapies which is more effective than the sum of their parts. In addition, we are looking at how agents that target cellular components such as centrosomes and microtubules, may influence response to radiotherapy. We are looking for combinations of therapies to increase immune response or increase radiation induced cancer cell death. For example, controlling blood vessels, and hence everything that they supply to the cells in the surrounding environment is likely to modulate the sensitivity of tumours to radiation. This is closely linked to the work on hypoxia in theme 1. In addition, we are studying the role of non-cancerous cells within tumours, such as immune cells and structural fibroblasts (cells that synthesise connective tissue), on the response to irradiation.

Treatments for cancer can come from many places such as the Pacific yew tree, where the drug Taxol originally comes from. 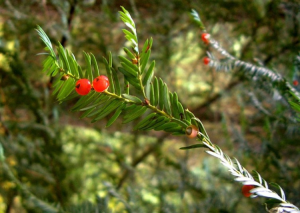 Photo by Jason Hollinger from Wikipedia Commons / CC BY 2.0

This theme aims to optimise the radiation dose delivered to tumours in order to maximise its therapeutic potential whilst minimising healthy tissue toxicity. This can be achieved by improving methods to:

2. Target radiation and radioactivity to tumour areas only

Molecular radionuclide imaging and magnetic resonance imaging are some of the imagining techniques used to predict and measure radiotherapy toxicity and outcomes. CT scans with new algorithms can also now account for age of the patient and current observations of toxicity in healthy tissue. This will maximise the benefits of novel precision radiotherapies, particularly during high energy proton therapy for children, who suffer from more serious side effects when their healthy tissue is damaged than adults. Take a look at this batman mask at The Science Museum for children to wear as they undergo radiotherapy: 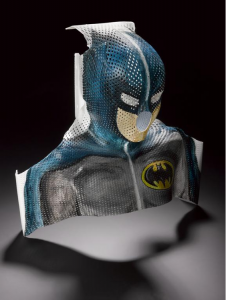 Molecular radionuclide therapy, i.e. injectable radioactive therapies, are also being investigated for their potential to deliver high radiation doses specific to tumours only.

In order to analyse outcomes and risk predictions effectively there must be a large amount of data to refer to, which can be difficult to obtain. We aim at creating a centralised hub of data, which will enable researchers to apply computational tools to a large sample size and fast track research. This will be a comprehensive platform for radiotherapy data with very detailed inputs such as clinical data, medical images and treatment details.

We are also developing novel methods for risk prediction which facilitate the application of deep learning techniques to rich datasets (such as the datahub) to allow further personalisation of radiotherapy. For example, inoperable non-small cell lung cancer which has a poor survival rate will potentially greatly benefit due to the large variability observed between individuals in this type of cancer.

Predictive anatomical models can also be used to improve the targeting abilities to radiation, to ensure radiation is optimally delivered to the tumour whilst sparing healthy tissues as much as possible. An example is by using computational models of how patients breathe and how tumours and surrounding anatomy change shape during treatment at the radiotherapy planning stage to create personalised treatments less sensitive to such anatomical variations.

Technology is always changing and advancing across the world, from the historical and vital introduction of antiseptics by Sir Joseph Lister, of which you can see some of the old equipment used at the Gordon Museum of Pathology, to using proton therapy technology in CT scans – which has not been done yet. However, you can see a theoretical model of what this might look like via the Wellcome Collection. 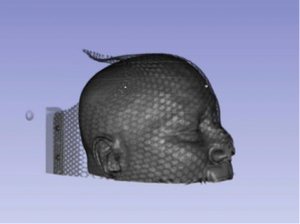 Photo by Nigel Allinson from Wellcome Collection / CC BY 4.0

Radiotherapy works by interacting with cellular components such as DNA, which carries genetic information. When DNA is damaged beyond repair, cancerous cells are usually destroyed. Discover the complex structure of DNA with an interactive model. This principle underlies all radiotherapy.

The final stages of radiotherapy research often require the new knowledge and ideas to be tested in human trials to prove they work effectively. This is essential for transferring treatments into appropriate widespread use.

Hospitals across London will work with RadNet City of London in carrying out clinical trials. This includes St. Bartholomew’s, Guys’ and St. Thomas’ Hospital, University College Hospital and Royal Free Hospital. There are many projects at different stages of development. 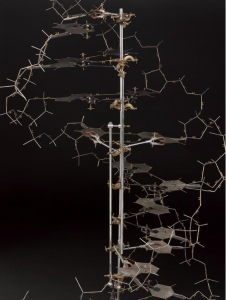